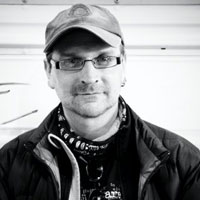 Philip Robertson is an Internationally renowned Cinematographer who also serves as the Senior Lecturer in Cinematography in the School of Film, Music & Performing Arts. Robertson trained at the Russian State Institute of Cinematography in Moscow (VIGIK) and is a graduate of the Northern Film School.

The drama strand of his Film and Television career embraces most genres and budgets - from gritty Northern comedy such as "Ideal" (Jonny Vegas - Best Comedy, Royal Television Society) through lush costume dramas such as "Tess of the D'Urbervilles" (Gemma Arterton, Eddie Redmayne) and "Larkrise to Candleford" to BAFTA winning single dramas such as "Zig Zag Love" (director Gillies McKinnon BAFTA, Small Faces) and mainstream Hollywood productions.

Robertson has won numerous National and International Awards for his work, which include two prestigious Kodak Vision awards for cinematography; one for his first Feature Film "Beyond the Ocean" (2000), the other for the critically acclaimed "Frozen" (2005 Shirley Henderson BAFTA).

A recent Film "You And I" (director Roland Joffé - The Killing Fields,1984 and The Mission, 1986 Oscar nomination for Best Director) went on general release in America. "Rokland" (Martin Thorsson, Varieties '10 directors to watch') has been nominated for four Eddas (Icelandic Oscars), one for best Cinematography and will be screened at the Berlin Film Festival. Robertson has been busy shooting films and television. His first feature film for Universal Studios "Werewolf The Beast Among Us" is available in the UK.

Most recently a film which Robertson was Cinematographer on titled "Shok" which was shot in Kosovo has received an OSCAR Nomination for Best Live Action Short Film (2016).

Robertson has a keen interest in auto-ethnographical approach to research, as it relates to his numerous and varied work.

Robertson continues to research cinematographical innovations that will have a relevance to his professional life as a Cinematographer and considers the impact/implication to inform his teaching. For example, he is active in researching the effect of digital technologies (Robertson is currently involved in a documentary on this very subject) on the art of Cinematography and the effect these cutting edge technologies have on his art form/visual storytelling. A related interest of Robertson's is how new medias and platforms are having a dramatic effect on how society "consumes the image".

He also is planning to research the nature of excellence as regards his specialisation of Cinematography and has intentions to broaden this research to including comparison with other disciplines such as music, sport/sport science and medicine.