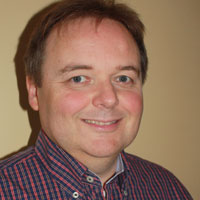 Gary joined Leeds Beckett in February 2016. He has held academic and postdoctoral research positions at Maynooth University, National Institutes of Health, University College London and Swansea University. He obtained a BSc (Hons) Genetics and PhD from University of Liverpool.

Since embarking on a PhD in 1991 Gary’s research focus has been on the use of lower eukaryotic organisms, such as yeast and other fungi, to study aspects of cellular stress. His research expertise is in molecular biology, microbiology and genetics. During his PhD and postdoctoral training he utilized Aspergillus nidulans and Saccharomyces cerevisiae [baker’s yeast] to study DNA repair mechanisms and cellular responses to stresses such as heat shock. Due to the conservation of such molecular responses between diverse species, the findings from studies on simple model organisms such as baker’s yeast are also applicable to more complex cellular systems such as mammals.

Current specific research projects are focused on deciphering the effects of post-translation modification [phosphorylation and acetylation] of Hsp70 on cellular function. Hsp70 is a highly conserved protein that is involved in a variety of essential cellular functions, for example assisting other proteins to obtain a functional three-dimensional structure. In this regard Hsp70 is referred to a chaperone. A number of devastating human neurodegenerative diseases such as Alzheimer’s and Parkinson’s are caused by improper protein folding, and are indeed classified as protein mis-folding diseases. Hsp70 plays a central role in preventing protein mis-folding and hence is a potential therapeutic target for such diseases. However, with Hsp70’s involvement in such diverse and important cellular processes, targeting this protein directly can be problematic due to unintended side effects. Therefore we are taking a novel approach and aiming to understand the effects of altering Hsp70 function through protein modification such as phosphorylation and identifying the proteins that carry out these modifications. An example of the impact of such an approach was the discovery of a new role for Hsp70 in cell cycle control through phosphorylation of the protein (Truman et al. 2012), which provides a potential new therapeutic strategy for certain cancers. This work is carried out in collaboration with Dr. Andrew Truman [University of North Carolina, Charlotte].

Other ongoing projects are focused on developing new therapeutic strategies against the opportunistic pathogen Aspergillus fumigatus. This fungus is responsible for a significant number of deaths worldwide in immunocompromised individuals [eg, patients undergoing chemotherapy]. The development of new antifungal treatments is a major global concern. In collaboration with Professor Sean Doyle [Maynooth University] we are taking a novel approach of understanding and utilizing unique aspects A. fumigatus endogenous biochemistry to identify new molecular therapeutic targets. Specifically we focus on understanding the molecular stages of the production of secondary metabolite mycotoxin gliotoxin. We have identified and characterized how the fungus protects itself against its own toxin [Schrettl et al. 2010] and we are now deciphering how the toxin interacts with other cellular metabolic processes [Dolan et al. 2014, Owens et al 2015, Smith et al. 2016], which may allow us to manipulate gliotoxin production in vivo as a new therapeutic strategy for this hard to treat pathogenic fungus.