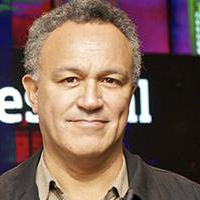 Steve has worked full-time at the Northern Film School over the past 13 years. He has undertaken postgraduate research into the radio features and TV documentary, taught on the BA programme on trade and industry insight, experiential learning and research.

Before going to a Polytechnic in 1986 in London, Steve worked in a variety of jobs not particularly relevant to his academic career. Perhaps the most relevant was the year he spent as a volunteer Film Production Assistant in 1985 in Manchester, and then later in 1990, working as a part-time Assistant Programmer for a regional Film Theatre in Derby. Following this he preferred to work locally within the region and combined part-time teaching duties with Hall Place Studios, postgraduate research with De Montfort University, and personal childcare whilst living in Sheffield.

Now, at Leeds Beckett University, his current position is Senior Lecturer on the undergraduate programme of study covering Experiential Learning and is the International Student and ERASMUS tutor at the Northern Film School in FMPA. His research interests are in British television documentary since the 1950s to the present. He is also UCU Branch Chair (CC).

Steve has developed teaching of documentary and television drama at undergraduate level at the Northern Film School – Leeds Beckett University. He is currently researching and developing the second of two journal articles that will complement his teaching and research for the coming years.

The articles will be destined for the Journal of African Media Studies (JAMS) in September 2016. The two journal articles will be the sum total of the second of two conferences at the University of Westminster – the first delivered back in November 2013.