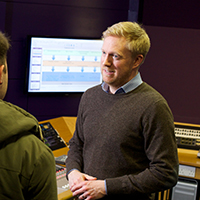 Tom has been working at Leeds Beckett University as an academic since 2004. Before this he worked as a Studio Technician in the Leeds Beckett recording studios between 2001 and 2004. During that time Tom worked for and produced music for an independent record label 'All Around the World'. During 2008/2009 Tom gained Apple’s Logic Studio Master status one of only two in the country at the time and delivered training at the New Technology Institute.

Since completing a Masters in MA Music Production in 2009, Tom has achieved Fellowship and recently Senior Fellowship of the Higher Education Academy.

Tom has also been an external panel member for the the revalidation of music production related courses at the University of South Wales.

Tom's research interest are in Audio to Film, Studio Production and Creative Music Production. He has been consulted on projects to develop music technology curriculum in secondary schools in the local area. Tom also has an interest in Field Recording and the use of this in popular music production.