An account of Alexander Kelly’s one-to-one performing arts show, ‘Inspiration Exchange’, has been published this month in Performance Research: A Journal of the Performing Arts. Here, he explains how the project came about.

In these interactive pieces, the key is to find a clear mechanism that allows the conversation to happen. When we’re making work we’re looking for the right frame, or form, to best explore the ideas that we’re interested in. The form that adds something, that articulates something that another form wouldn’t. In this case one that allows sharing. That is sharing.

I have a new article in the "artists' pages" strand in the latest edition of Performance Research: On Value, edited by Joslin McKinney & Mick Wallis. The whole issue is a response to the PSi#18 Conference that they ran last year, and they invited me to submit a wider response to the Inspiration Exchange that I ran as part of it.

Here's the text / notes of what I said as the final summing up / 'story of the day' presentation at the end of the Inspiration Exchange at PSi#18 in Leeds. The exchange was open from 9.30am - 6pm, with this happening in the last 20 minutes.

I started off writing 36 cards, thinking that six rows of six cards would work aesthetically. But when I got the table, I realised that five rows of seven worked better. 35 cards. So I had to choose one card not to include. 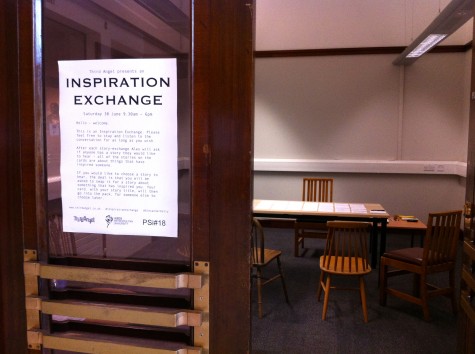 I chose not to include one that I thought the most general piece of inspiration: SOCIETY DREAMING. This is something that Douglas Rushkoff said on a panel I heard at the Edinburgh TV Festival many years ago. He explained the idea that culture and art are society's way of dreaming, its way of working things out. He talked about the experiments that have been done in which human beings are stopped from dreaming, being drugged or simply woken up whenever they enter REM / dream sleep. After a couple of weeks of not being allowed to dream, human beings start to go mad. And you can see a parallel, he explained, when societies aren't allowed to dream; regimes that censor and restrict art eventually start to go mad.

This idea has stayed with me since I heard it. But it seemed, in this context, these easiest card to extract.

And then the Exchange opened and no-one came in. The calm before the storm? I hoped so. I wrote some notes.

For the first hour it's only members of the production team who cross the threshhold - people with furniture and lamps.

Other people look in, most bearing takeaway cups of coffee. They promise to be back later, or just wish me luck for the day. I enjoy the quiet. I use the time to get a double espresso, eat a banana. Rearrange my furniture. Put the foldaway chairs away into the corner, to make it look like I'm expecting less people. I figure out how to use the remote controls for the air conditioning unit and the dimmable lighting.

I start to write the words that I am reading to you now, 7 hours later.

I think about the way my grandma would just slightly adjust the objects on a worksurface in the kitchen. A small notepad, some keys, a pack of pills. Moving them mere millimetres. As a teenager I found it irritating. (Or did I, really? Did I actually find it strange, and did I find things that I didn't understand, irritating? Or did the door it opened onto the loneliness of old age frighten me? Was my irritation just a defence mechanism?) But now I understand, I think. Just to make sure everything is just so.

I watch people walk past the doorway to my self-contained and well signposted room, without looking in. I wonder if I should have asked to be out in the main hall... Occassionally people slow slightly, look in and smile at me. But they don't stop.

I realise that I am expecting someone to interupt me writing these notes, so I can break off and tell a story. To them. To you.

I think about my children.

And then someone comes in and...

I swap A PERFECT CIRCLE
for THE PERFORMANCE THAT DIDN'T HAPPEN
a story of sticking at it.

I swap "WHEN WILL THE WEDDING TAKE PLACE?"
for LOCKSMITH: "I WANNA SEE YOUR WORK."

I swap PEOPLE WITH CLIPBOARDS
for ANCESTRAL FRUSTRATION

I swap NOT KNOWING WHAT TO THINK ABOUT POLE DANCING
for DO I DRAW THE ACTORS OR DO I DRAW WHAT I SAW?

I swap 23 POSTCARDS FROM AMERICA, FROM MY DAD
for HIRE AN APOLOGY

I swap AN ESCAPED LUNATIC ON CANNOCK CHASE
for this: 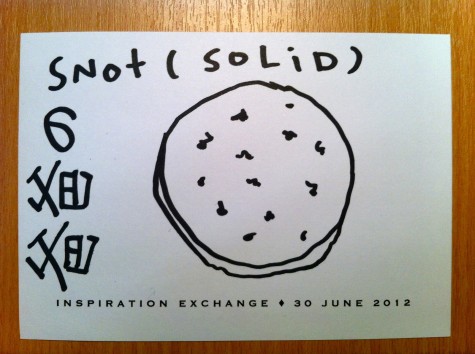 I swap EMPTY BENCHES
for THE FLOOR CARRYING YOU

I swap THE PATENT NUMBER OF A UFO
for ARE CONKERS BABY WOOD?

At some point I say to someone, "Pick one that sounds good." And then I think what a stupid thing to say that is. I think about the disappointment - for them and for me - when someone picks the "wrong" card, and gets a story that they're not that interested in. Particularly if this is a story I've told to someone before and they've really found a personal connection to it, and then this time it doesn't mean much.

I swap HURRY SICKNESS
for SQUIRRELS
in general, and then I immediately swap SQUIRRELS
for A SQUIRREL
in particular.

I swap THE INSIDE OF A SAXOPHONE
for LETTING GIRLS BE

I swap THE EMPTY SOAP PACKET
for QUICK SHAVE

I swap A SWIMMING POOL AT NIGHT
for PROFESSOR MOAN ALOT

I swap AN UNBOOKABLE PIECE OF KIT
for MR. BEEFHEART

I swap DESIRE PATHS
for I CAN DO THAT

I swap A SQUIRREL
for FU CHU CHOO-CHOO

We refine the rules and figure out what happens if I'm offered a story first,
and so I am swapped 1967
for A BOTTLE OF MARBLES

I swap RIGOROUS HERBERT
for LIFE BEGINS AT 40...

I swap FU CHU CHOO-CHOO
for A TREE IN SIBERIA

And then we were out of time. 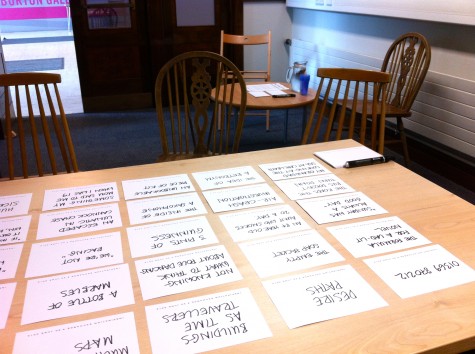 For more information about the project, please see this article.

Alex is Reader in Theatre & Performance and has been with Performing Arts at Leeds Beckett since the start of its first course in 2006. He is Co-Artistic Director of the Sheffield-based theatre company Third Angel, with whom he devises, directs, writes, designs and performs. Third Angel’s work tours throughout Britain, mainland Europe and beyond.

Arts degrees teach you much more than how to think

Breaking the Waves: Practice as Research in the Creative Arts