In this blog, Oliver Bray, Head of Performing Arts at the university, looks at the performance of the Royal Wedding, the new Duchess of Sussex and Prince Harry.

The Duchess of Sussex is the new stage-name for Meghan Markle, and her formal indoctrination into the Royal narrative - her marriage to Prince Harry - allows for the performance of the Royal family to exist for us as never before.

Previous to the announcement of her engagement to Harry, Markle was a successful television actor. She was most well known for her portrayal of Rachel Vane in the serial drama Suits, this together with her catapulting into the new context of Duchess-to-be, makes for a disjointed public profile. Despite the great efforts of the international press to saturate the public with Harry & Meghan photos – largely wearing chic coats and huge smiles – Markle’s previous life remains stored in the digital cognizance of the internet and our memories of box-set bingeing when Suits first hit Netflix.

The point here is that as I sat down on Saturday to watch the BBC coverage of the spectacle of the wedding, I was already confused as to who and indeed what I was watching. I observed, as did allegedly two billion others across the world, the wedding guests arrive.  Familiar players as it turned out, George Clooney, Victoria and David Beckham – all Dorian Gray-like in their attractiveness, physical manifestations of the recorded television star’s immortality.

Like Markle, their performed lives are carried with them everywhere, irrepressibly replayable, held in a public and digital consciousness ready to be revisited on an audience’s whim. They were actual wedding guests of course, and while we may grapple with the notion that Meghan and Harry are friends with all these celebrities, their private relationships are invisible and consequently meaningless to us as an audience.

'I think of George Clooney as a reawakened Dr Doug Ross from ER, ready to resuscitate James Corden'

So, when I watch Clooney swagger through the Windsor Castle grounds, I think of him as a reawakened Dr Doug Ross from ER, ready to resuscitate James Corden if he were to clumsily fall from his Range Rover after a particularly dizzying Carpool Karaoke session with Elton John, also in attendance. (Of course Elton is there, the eternal personification of the link between pop music and the Royal narrative – he sang at the prequel, he’ll most likely perform in the next season.)

This conflation of our mediatised understanding of Meghan, Harry and their guests might feel extraordinary to us. Audiences enjoy the suggested authenticity of real people and personalities they recognise. The Royal wedding uniquely provides a rare opportunity to catch an authentic glimpse of, for some, the most revered and admired of all – we need to know that even kings and queens are fallible.

This desire to witness real people can be sated by theatre, but has long since occupied live television, particularly the competitive reality show, where we not only get to voyeuristically judge other people, we get to actually judge them too – usually by paying a couple of quid to phone in and alter the course of the real world (incidentally, who voted for Prince Charles to walk Markle down the aisle?). Theatre has always been an initiator of agency and our thirst for wanting to impact the world remains.

No surprise then that expert critical host of Big Brother and XFactor, Dermot O‘Leary, was drafted in by the BBC to keep all the disparate parts hanging together, reminding us that this wedding heralds a change, that we have never seen anything like this before. And O’Leary’s right, we haven’t seen this before, the Royal wedding saw our fictions collide.

The sense that any meaningful truth can be disentangled by the images presented to us, is framed by the absolute certainty of our witnessing of love with the highest possible production values.

As Huw Edwards’ commentary reminded us, every step of the wedding was meticulously choreographed, a visual dance so beautifully composed, so richly presented, it was close to impossible not to be moved. I was reminded, as an embarrassing tear trickled down my cheek, of the power of performed ritual, of the breath-taking effectiveness of repeated, simplified, symbolic sets of actions undertaken by people that really mean what they’re doing.

This tolerably seductive demonstration of love was only tempered by the briefest of cutaways to a thoroughly petulant looking Royal family – or as we may now think of them, the old Royal family – you know, the ones on The Crown, they’re rich and arrogant, they argue a lot but are ultimately human, where Prince Philip is portrayed by Doctor Who. It’s confusing.

The more I think about it, the more I believe the Royal wedding to be one of the most extraordinary pieces of performance I have ever seen.

It was a rhizome of a show, a web of related but ultimately baseless cultural phenomena, a narrative so complex, so layered and connected, so unbearably compulsive, I almost forgot the beautiful summery day I was missing to watch it. My back garden wasn’t half as vibrant as the transformed streets of Windsor the newlyweds processed through – which unless you really searched for the HSBC sign on the high street, looked strikingly like any chocolate box depiction of quintessential English scenography. Crowds lined the hyper-real streets, simultaneously being performers and audience – caught up, bound up, subject to and driving forward the story, staggeringly happy.

There is no doubt that the performance of the monarchy is super hip right now. The broadcast of the Royal wedding played beautifully into this narrative, riding a wave of populist British nostalgia-inducing television that has us yearning for competitive baking competitions, community midwives and real Royals.

What better way to pull together the multiple contemporary desires of individualist authenticity, patriotic spectacle, and the theatricality of privilege. 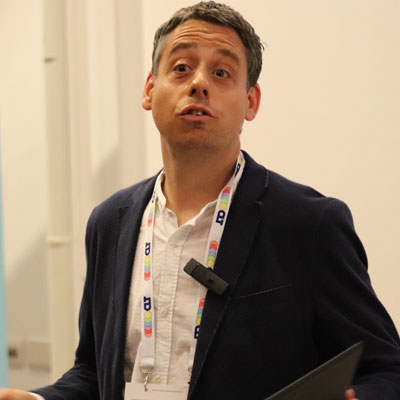 Oliver joined Leeds Beckett University in 2006 and has been the Head of Performing Arts since 2014.