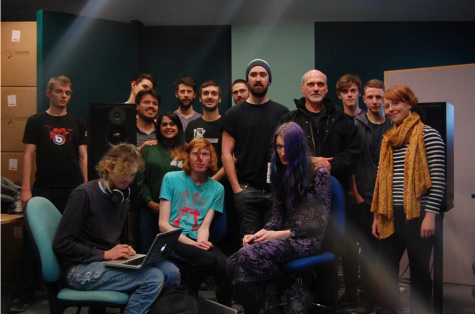 Following a successful lecture and concert last spring, sound designer and electronic composer Kim Cascone returned to Leeds Metropolitan University to lead a two-day workshop on ‘Subtle Listening’, followed by a performance of his Dark Stations, a 42 minute multi-channel sound-diffusion as part of the Music, Sound and Performance group’s continuing series of Echochroma concerts.

Over the last 30 years, Kim has worked in film (with David Lynch on Twin Peaks, Wild at Heart and also at George Lucas’ Skywalker Ranch), the record industry (through his labels Silent Records & Pulsoniq Distribution), games audio (with Staccato Systems), as well as collaborating with a diverse range of experimental and electronic musicians including Pauline Oliveros, Scanner, Merzbow and Tony Conrad.

The workshop was focussed at final year and Masters level students, and explored issues relating to sound design and composition beyond purely technical considerations and to encouraging participants to develop more creative and imaginative responses to sound through a diverse range of methods.

Much of the first day was spent exploring our own reflexive relationships to sound through meditation, listening exercises, drawing, writing and often ‘transcoding’ between these in order to bring participants into a vital relationship with sound ‘in itself’, rather than the more superficial semantic or symbolic qualities that sounds often immediately suggest.

The second day opened with a group meditation led by Kim, which became the basis for a series of individual sound design projects based on graphically scoring and interpreting the resulting ‘sound shapes’. A session in the afternoon was dedicated to the playback and discussion of these student works with Kim.

The workshop was enthusiastically received by students. Undergraduate James Phillips wrote: “The workshop was really well-organised and Kim created a great atmosphere in which creativity could be explored. I learnt a lot about different methods of approaching sound. There was a strong emphasis on meditation, which I really enjoyed. I felt that this gave the workshop something unique in which I have never experienced previously. I would like to thank Phil Legard for organising the event and Kim for running the workshop.”

The workshop was followed by the eleventh Echochroma concert in the James Graham Building Jubilee Room, featuring work by two guest composers Rob Mackay (University of Hull) and Kim Cascone alongside pieces by faculty members Ben Reibel and Phil Legard, and senior learning officer for music Sam Mitchell. Rob Mackay had also delivered a lecture on spatial audio and soundfield recording to students on the prior day and played two pieces in the first half: Living Waves – a collaboration with Evelyn Glennie, based on stone lithophone recordings – and Sea Swim Sounds – a multi-channel installation based on Scarborough’s South Bay in collaboration with poet John Wedgewood Clarke.

The second half of the concert was dedicated to a reprise of Kim Cascone’s Dark Stations, which ensures a unique sonic experience in each performance based on the acoustics and the position of the listener within the space in which it is played. As was the case last year, the piece – performed in darkness – prompted some interesting discussion amongst listeners reflecting on the work as both a psychological and acoustic experience.

Phil Legard's background is in experimental music, particularly in the fields of generative and algorithmic composition. Additionally, he has developed a large catalogue of works that explore landscape through mixed-methodologies, including improvisation, sonic art, writing and auto-ethnographic approaches.