The Media and Place conference, held to coincide with the launch of our new MA Media, took place in the Rose Bowl on 11 and 12 July 2014. And what a great event it was! Hosted by Lisa Taylor, Zoë Thompson and I, and supported by the Centre for Culture and the Arts, the conference welcomed delegates from all around the world to present their research, creative practice and early work examining the themes of Media and Place.  The international flavour of the event was warmly welcome and gave a real boost to the event. Delegates came from Australia, Brazil, Poland, the US, Wales, all of Europe, and some even from Yorkshire. The following précis indicates just a fraction of what went on…

Several scholars investigated how film and TV texts represented place, space and identity. These included studies of how Portuguese director Paulo Rocha depicts the city of Lisbon in Os Verdes Anos (1963) as a space of exclusion; the sense of Yorkshire created by Sam, Last Tango In Halifax and It’s Nice Up North; and visions of the post-apocalyptic city in Reign of Fire (2002), I Am Legend(2007) and The Road (2009). The aestheticization of the slum-space in Philippine urban cinema was considered in films such as Tirador (2007) and Tribu (2007); while the postcolonial hauntings of Mumbai were the subject of a paper on Dhobi Ghat (2010). The recent international success of Danish TV drama series such as The Killing (Forbrydelsen, DR1), Borgen (DR1) and The Bridge (Broen, DR1 & SVT1) questioned: what makes Danish drama travel?

As if to answer this, others explored how tourists are inspired to travel to and around ‘mediated’ places. The success of Game of Thrones(2011- ) has led to an increase in fans looking to visit the ‘real’ places of the fantasy world that the show takes place in, and ‘Capital Crime Cities’ such as Sherlock Holmes’ London, Hard-boiled Los Angeles and Millennium Trilogy’s Stockholm, provide a darkly attractive allure. Poznan’s hosting of two Euro 2012 matches of the Ireland national team gave the city an unprecedented coverage in the Irish press, effectively putting it on the cultural map of Europe for Irish readers. Conversely, the way in which Kraków’s selection as a tournament base for Euro 2012 was so poorly portrayed by the British national press has led to a deterioration in its image as a desirable travel location. Australian media specifically proved the subject of two studies. An engagement with Frances Calvert’s 1990 documentary Talking Broken made the case for a type of Postcolonial Media Studies that maps the geographical and historical complexity of the space/place/media relation. A study of the beach in Australian cinema noted that Australian national identity has a long history of being intrinsically tied with landscape. 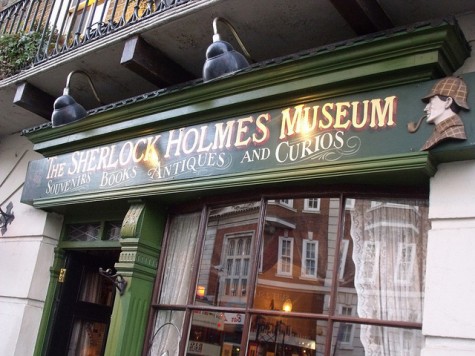 A strand of work on photography and art work examined Walker Evans’s photographs of the Southern United States in the 1930s, and the role of masculinity in George Shaw’s paintings of images of Tile Hill, Coventry, West Midlands; considering how the processes and content of Shaw’s paintings mirror that the moment of transition in labour specific to the time and area. David Hockney’s regional identity was investigated by an empirical study of people who know and feel a sense of engagement with ‘Bigger Picture’ pieces. This found that for some respondents certain works act as particularly resonant sites of emotional pull.

Other accounts of empirical research specifically set out to apply and challenge theoretical constructs of space, place and the media, while some scholars proffered new theoretical understandings for investigation. A ‘t hick description’ of the FM dial in Jordan elaborated on fieldwork in Amman during the summer of 2012. One author argued for a model of methodological site-specificity, in which media routines should be considered as site-specific. A summary of the European Capital of Culture initiatives were mirrored by a welcome from Dinah Clarke, Programme Manager at Leeds City Council, who reflected on the city’s hosting of Le Grand Départ and considered the prospect of bidding for Capital of Culture. 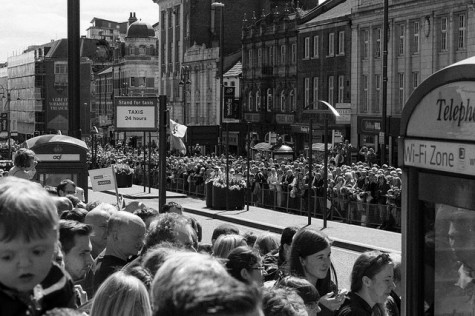 The Grand Départ in Leeds. Image used under creative commons license and courtesy of Stephen Melling.

Many papers moved further beyond the representative to consider how we might experience the ‘sense’ of places by using all of our senses, as well as multiple media. The fictionalization, staging, and projection of urban sound was considered in relation to how Dublin is ‘staged’. Gaming elements such as goals, rules, and feedback, were explored in relation to non-gaming contexts, such as using smart phones to navigate through cities. The influence of mobile communication devices on the daily commute were examined, as were the aesthetic practices that are involved in curating and circulating urban landscape photographs via social media.

A further strand of papers examined regional and national policies and practices. There were arguments that commercialism and ownership left little room to discuss the regional in regional television; and a comparative small nations framework that enabled a better understanding of the nature of mobility in the European and American television landscape, examining why it is that certain places do (or do not) become the location of television stories. Other work examined creative policy and practice: how the BBC’s Roath Lock studios in Cardiff Bay has been received and interpreted by the local TV industry from both senior levels of broadcast executives to grass roots, early career creative workers. 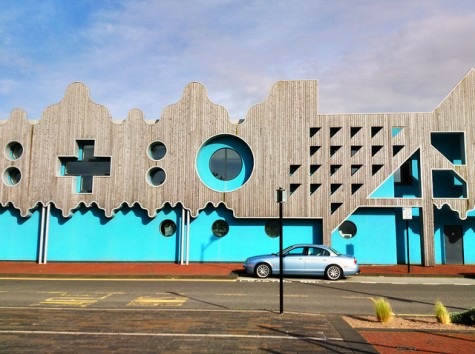 This creative work also formed a key part of the discussion. A paper arising from the Research Council funded project, ‘Media Community and the Creative Citizen’ investigated the role of the creative economy in connected communities. ‘Frictions of Distance’ reflected on a series of workshops that created a networked interactive space between the physical geographical locations of The French Institute-Phnom Penh, Cambodia and the Iniva Gallery, London; and ‘ BiNS (Birmingham: It’s Not Shit)’ offered a practice-based reaction to the marketing and official discourse around the city of Birmingham, UK at the turn of the millennium.

The three keynote addresses perhaps more adequately sum up the very different approaches, methods and sites of investigation that were the backbone of the conference. Tim Edensor’s address noted the recent proliferation of light festivals which produce extraordinary spectacles and inclusive strategies to illuminate marginal urban and rural spaces. Helen Wheatley considered the topics of beauty and (tele)visual pleasure in relation to the presentation of landscape on television, arguing that programmes such as Coast (BBC2/1, 2005-), A Picture of Britain (BBC1, 2005), Wainwrights Walks (Skyworks for BBC4, 2007) presume a contemplative mode of viewing more traditionally associated with landscape. Shaun Moores made a series of arguments in favour of a particular approach to media and place: ‘Media studies have tended to focus too much on media’; ‘Media uses are one among many sorts of place-making practice’; ‘Some existing approaches have mistakenly associated media uses with placelessness’; and ‘The movements of place-making involve a bodily, sensuous, practical knowing’.

Our thanks go out to all of the delegates who enriched both days with their presentations, questions, comments and lively discussion.  We were delighted with the convivial nature of the event and hope to welcome you back soon.