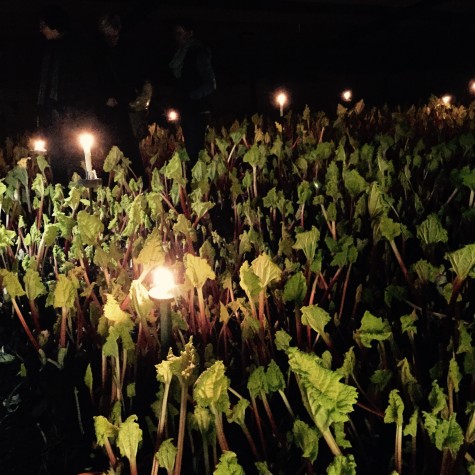 Two things about the tour particularly resonated with me. The first is the way that the tour and its focus echoed the process of working as part of a research cluster. At Oldroyd’s there were coachloads of people arriving from all over the country that had joined together to be part of this event, and the event worked on the basis of this difference. The same is true of our research project, where our strength is reliant on working together and learning from each other’s knowledge. As we found out, the rhubarb is a rhizome. The vast majority of the plant is hidden below the surface and it’s only the pink sticky bit that gets all the glory. Its strength as a single shoot is reliant on the whole plant – it’s only as strong as the support network that it’s grafted in to. The same is true of academia, where the ‘lone scholar’ focus creates a myth of a single academic seemingly rising to the surface on the strength of their individual merits. Much of the hard graft is undertaken by a whole network of people whose roles are purposefully kept hidden from view – the press office, photographers, financers, administrators – that keep the whole plant functioning, but rarely get the glory. How can academic output more fully celebrate and acknowledge this?

The second striking thing was the pivotal role that women played on the tour. The level of engagement went far beyond any ‘ladies who lunch’ stereotypes – these were people who had come from all over Yorkshire keen to find out more about its heritage, culture, practices and facilities. Many of them were doing the tour as part of a whole Yorkshire day, taking in ‘official’ sites of culture such as Betty’s Tearoom and the Yorkshire Sculpture Park, as well as ‘unofficial’ pilgrimages to family, friends, and favourite curry houses. Nostalgia played a key part in imagining Yorkshire - these women drew on their memories of rhubarb jelly not tasting like it used to - but future plans were always firmly in sight. Many of the people on the tour were buying plants that promised not to yield for three or four years. One woman remarked to Zoë that there wasn’t enough time on the tour to ask questions, and it’s true that women, particularly older women, often feel unacknowledged by officialdom, that their voices aren’t heard. I hope that these women share their rhubarb stories, and that they join us on the Women’s Day March this Sun 8 March,12.30 at Broadcasting Place.