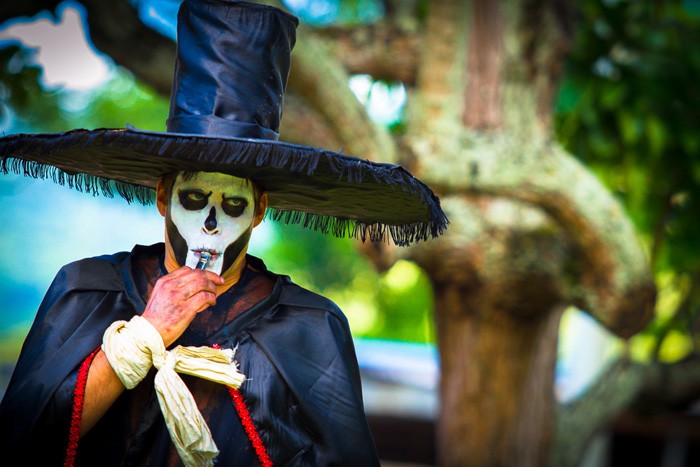 The ‘Turning Tides’ conference was aimed at exploring cultural ‘intersections’ between the Caribbean and the rest of the Americas.

It was an excellent conference, with contributions from eminent scholars such as Professor Harvey Neptune, readings by world leading Caribbean author Earle Lovelace and even a chance to meet the elusive Carnival Artist and Designer Peter Minshall who discussed his incredible latest Carnival King costume for the 2016 Trinidad carnival inspired by ballerina Anna Pavlova’s performance of the ‘Dying Swan’ and entitled ‘The Dying Swan: Ras Nijinsky in Drag as Pavlova’. You can watch the astonishing performance here. 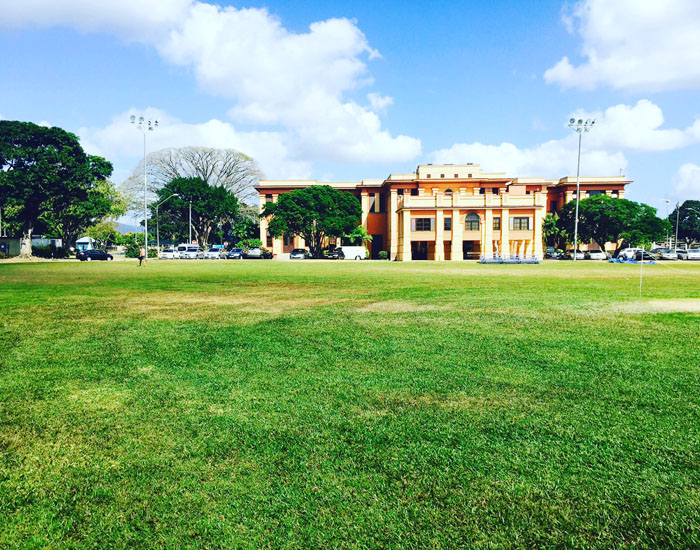 As part of my current research project on the role of the trickster figure in oral and literary cultures in the Americas, I presented a paper on the carnival trickster The Midnight Robber. The Midnight Robber is a quintessential Trinidadian carnival ‘badman.’ Dressed in a black sombrero adorned with skulls and coffin-shaped shoes, his long, eloquent speeches descend from the West African ‘griot’, or storyteller, tradition and detail the vengeance he will wreak on his oppressors. 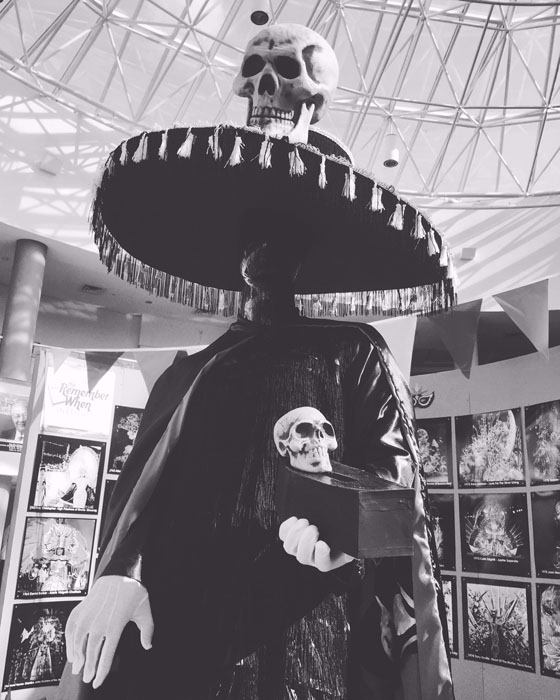 He exemplifies many of the practices that are central to Caribbean carnival culture - resistance to officialdom, linguistic innovation and the disruptive nature of play, parody and humour. Elements of the Midnight Robber’s dress and speech are directly descended from West African dress and oral traditions.

Like other tricksters of West African origin in the Americas, Anansi and Brer Rabbit, the Midnight Robber relies on his verbal agility to outmaneuver and triumph over his adversaries and thwart officialdom. He is, as scholar Rodger Abrahams has identified, a Caribbean ‘Man of Words’, and deeply imbedded in Caribbean speech-making traditions.

The Midnight Robber first appears at the turn of the 20th century in carnival bands of 30 or 40 Masqueraders. He was one of the few Mas characters whose speeches were central to his role. He confronted carnival revelers with his ‘robber-talk’, a unique blend of Creole and old-fashioned so-called ‘Standard’ English, and if his robber-talk was good, he was rewarded with money. The ‘bigger’ the words he used – the more complex, unusual and bombastic – the greater his payment from the crowd. Daniel Crowley notes in The Caribbean Quarterly in 1956 that the combined effect of the Midnight Robber’s outfit and speech could be so unsettling that the crowd quickly paid up.

His grand and verbose speeches detail his ability to wreak death and destruction to all those who stand in his way, as well as describing the injustices he has suffered at the abusive and corrupt hands of those in power. Sometimes, however, he describes himself as the abuser, claiming to be more powerful than the elements, the sun the moon and the stars, and so awful he leaves mothers and children terrorised by fear. The Devil and the Saviour rolled into one, he can lay claim to great tyranny – a destructive colonial force that brings misery to the Caribbean. Yet while he might describe himself as Columbus, at the same time he exposes the colonial crimes of the ‘dog[s] of the Saxon[s]’. ‘A cyclone in human form’, the Midnight Robber is dangerous, yet full of humour, and always ready to self-satirise, referring to his audience as ‘mock-men’ while clearly performing the role himself. One of his most comical and enduring claims, recorded by scholar Ruth Wuest in speeches in the 1950s and 80s, is; ‘at the age of three I drowned my mother Cecelia in a spoonful of water’. The Midnight Robber is a metafiction, bringing the audience’s attention to his performativity, to its fictive nature, ridiculing his own outrageous claims, empty threats and ridiculous pomposity.

Yet while they may be comical, the speeches of the Robber are also replete with coded messages. They can be ‘spoken to’ power, in the official carnival space, in the capital on the streets, yet they expose the historical wrongs and legacy of empire and slavery in Trinidad. They are profoundly subversive – like the Anansi trickster, the Midnight Robber has free reign to say and do as he pleases.

Ruth Wuest points out that in the 1950’s bands of Midnight Robber had reduced to no more than seven Mas players and his popularity waned throughout the following decades. Her conclusion is that independence in Trinidad in 1962 killed the popularity of the Midnight Robber due to the new ‘cultural-assertiveness for which the Robber lacked words’. Perhaps this was the case – under colonial rule he symbolised a freedom of expression and anger that diminished in the post-independence Trinidad. However, since Wuest’s article was published in 1990, the Midnight Robber has experienced a revival, and this year’s 2016 carnival saw several bands of robbers, especially played by children. However, like the Minshall’s 1980’s Midnight Robber, these ones are also ‘voiceless,’ and the tradition of speech making on the streets has clearly diminished. The Midnight Robber designed by artist and poet Marina Poppa for the Leeds West Indian carnival in 2013 delivered his own traditional robber-talk speech during carnival and performed the speech at Leeds Town Hall. The speech was then recorded and played as the parade took place on the road. This is another example of the efforts made by designers like Marina Poppa for Leeds West Indian Carnival, and in particular its founder, Arthur France, to keep the traditional Mas characters alive. 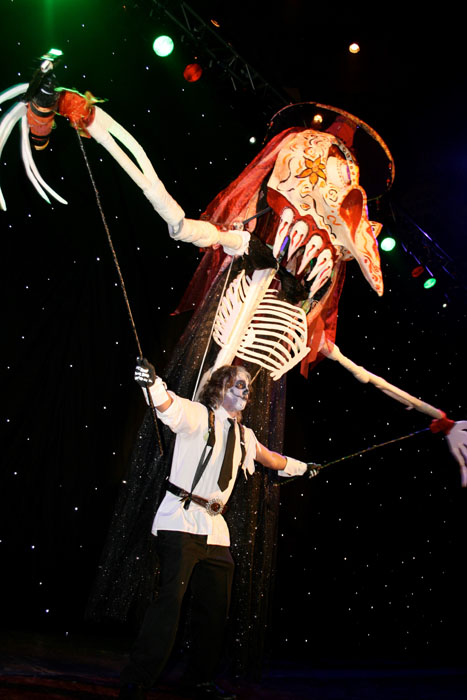 Like Anansi, a master of oratory who uses his linguistic skill to turn the tables on his oppressors, the Midnight Robber’s immense power comes from Caribbean oral storytelling traditions. Speeches are handed down from one robber to the next, testimony to the centrality of the oral tradition to carnival culture. One Masquerader known as ‘King of the Graveyard’ in 1980 explains that: ‘at one time I had as much as 64 speeches in my brain and you don’t have to walk with a book to have them there.’ Crowley notes in 1956 that many elements of the Midnight Robber speeches were directly lifted from secondary school texts books taught to Trinidadian school children, there are numerous references to a passage on the ‘Destruction of Port Royal’ in the 5th Standard Reader, as well as quotations from literary and poetic texts such as Daniel Defoe’s Robinson Crusoe. The subversion of the colonial educational text by the Robber is highly significant and can be aligned with the type of ‘writing back’ strategies employed by postcolonial authors Jean Rhys in Wide Sargasso Sea and J. M Coetzee in Foe, a strategy which challenges colonial power and destabalises representations of ‘the Other’ from the West.

The Midnight Robber is partly born out of the great Western cowboy movie of the 1920s and 30s, such as Jesse James.  But in a parody of North American influence and fused with Creole culture, this is the cowboy costume reworked and ‘signified’ upon; this is repetition with a difference, for the hat is no ordinary cowboy hat but has dangling skulls or even electric lights hanging from it and is often worn with outrageous shoes in the shape of crocodiles or alligators. Maureen Warner-Lewis points out that Midnight Robber’s hat is yet another traditional West African motif in Trinidad Carnival. She explains that the ‘hat is a replica of the chief’s hats worn in the coastal area of Nigeria between Lagos and Calabar’ and that the tassels fringing the brim are ‘indigenous icons of chieftaincy such as the beaded tassels hanging from certain kings crowns among the Yoruba’. The speeches too have West African roots; the ‘idiosyncratic, long-winded boast’ ‘recall the boastful tone of some African Masquerades’. This cross-cultural fertilisation destabilises the power of European and North American influence in the Caribbean as that which is from the ‘outside’ is fused with African traditions and the home-grown.

I argued in the paper I delivered at the ‘Turning Tides’ conference that while the tradition of robber-talk in Trinidad is diminishing, Caribbean authors such Nalo Hopkinson and Keith Jardime are making the Midnight Robber and his robber-talk central to their work, and in doing so, helping to ensure his continued relevance in the contemporary Caribbean.

I hope to return to Trinidad next February to take part in carnival and conduct oral interviews with Midnight Robber Mas players, to examine the extent to which the traditions are being continued and the role they play in modern Trinidad. This research will feed into my book as well as the Caribbean Carnival Cultures strand that I’m developing at the Centre for Culture and the Arts at Leeds Beckett, which will culminate in an international conference on Caribbean Carnival in May 2017 in partnership with Leeds West Indian Carnival which celebrates the 50th anniversary of Leeds West Indian Carnival, the first Caribbean carnival in the UK.

The Carnival Cultures research strand will encourage a focus on the role of trickster figures, such as Midnight Robber, in the Caribbean carnival, as well as exploring the wider implications of the potential of carnival as a site of resistance to oppression.