Hosting the International Caribbean Carnival Conference was exhausting work but the event was a great success, making the two years of planning worthwhile. My conference co-host was Professor Max Farrar and the event was supported by the Centre for Culture and the Arts in partnership with Leeds West Indian Carnival. The conference celebrated the 50th anniversary of Leeds West Indian Carnival and I presented the research I conducted at the Trinidad carnival 2017 on the traditional carnival masquerade characters the Midnight Robbers, and it was great to discuss the experience while it was still so fresh in my mind.

The three-day conference, which was supported by my successful Arts Council ‘Grants for the Arts’ funding application, attracted 160 national and international participants, featured over 45 speakers in four parallel panels as well as dance, design, poetry and traditional masquerade workshops. It received lots of positive feedback and participants travelled from across Europe, the Caribbean, Canada and the US to attend.

Evening events included an enlightening carnival film screening (organised by Laura Ager from Film Fringe) of Our Soul Turned Inside Out' (Mary-Ann Brailey, 2015), which explored the darker, more violent aspects of traditional carnival masquerade and its effects on the psyche, at the Little Reliance Cinema, a night of Caribbean food and Soca music by DJ Soca Haze at the Leeds West Indian Centre, a Civic Reception attended by 200 people at the Leeds Civic Hall and, on the Sunday, a Black Heritage Walkled by Historian Joe Williams around the Leeds University campus. 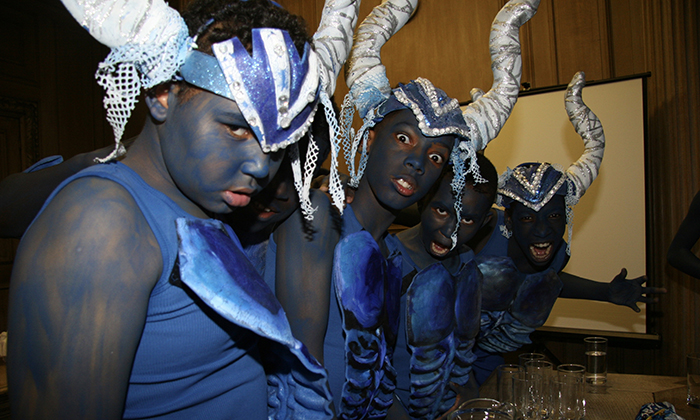 Leeds City Council helped us to deliver the Civic Reception at the Leeds Civic Hall on the last night of the conference which opened with a speech by the Lord Mayor. The evening included Caribbean music by the New World Steel Pan Orchestra, an exhilarating dance performance by RJC dance Blue Devils youth troupe, poetry readings by Leeds Young Authors, Malika Booker and Maggie Harris, and a delicious Caribbean meal - and it couldn’t have gone more smoothly. 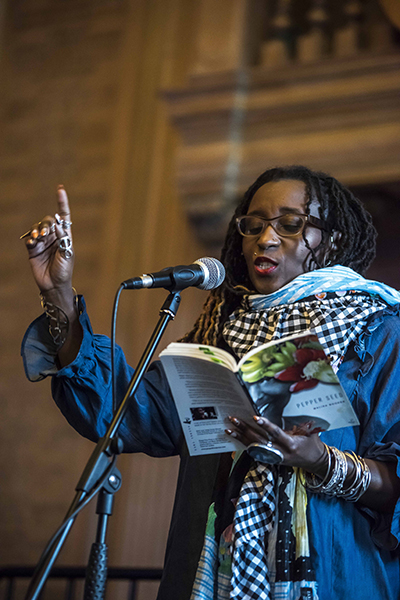 Student volunteers from my third year English Literature ‘Cultural Crossings’ module, Laura Duncan, Gemma Hickey and Rose Korner, English MA student Jody Winter, and my PhD students from the School of Cultural Studies and Humanities, Muhammad Dahiru, Tola Dabiri (Artistic Coordinator) and Shabina Aslam, all worked really hard to facilitate the event and presented the very best aspects of the university to the public. PhD student Danielle Hall was our Conference Administrator and she did an incredible job – we are not sure we could have pulled it off without her! 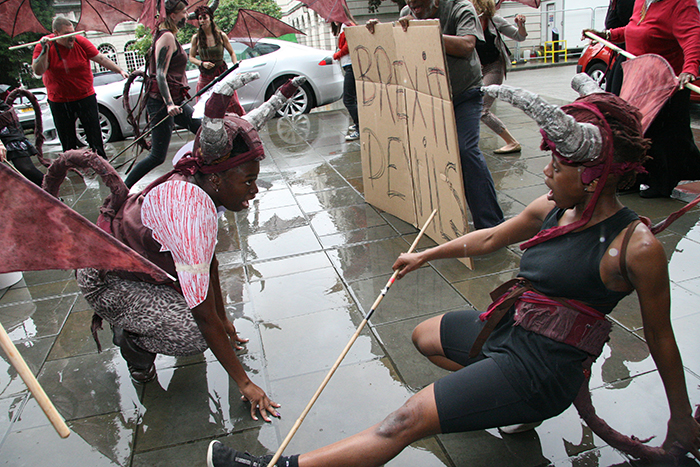 An extremely memorable part of the conference was the 'Brexit Devils’ Jab workshop with well-known Trinidadian Theater Carnival practitioner Tony Hall. ‘Jab&rsquo is French Patios for Diable (Devil) and there are a variety of Jab characters played in Caribbean carnival which link carnival masquerade closely with the legacies of enslavement and plantation, as well as African, culture. 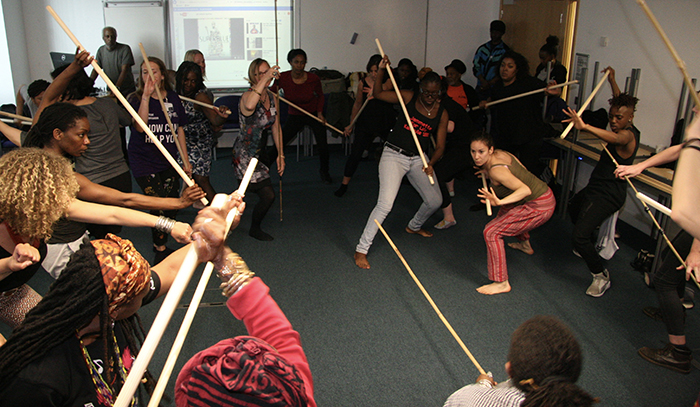 After learning some basic 'Calinda' stick fighting moves, Tony asked us to discuss and then draw pictures of our ‘Brexit’ fears, which ranged from fears about Brexit allowing racist people to openly voice their prejudices - and the effect of this on loved ones - to worries about not being allowed to stay in a country you think of as home. Using the images of our fears as a source of inspiration, we created placards and slogans and dressed in horns, wings and tails, provided for us by the wonderful Emily Wood from Cabasa Carnival Arts.

We then gave voice to, and danced away, our ‘Brexit Fears’ in the Yorkshire drizzle outside the Rose Bowl building. Some participants immersed themselves in the Jouvay experience and covered themselves in mud and, accompanied by a tin pan drum, we transformed the grey city scape with our movements and shouts of anger, release and joy. It was a profoundly transformative experience and you can find out more about the workshop via Tony Hall’s blog post. 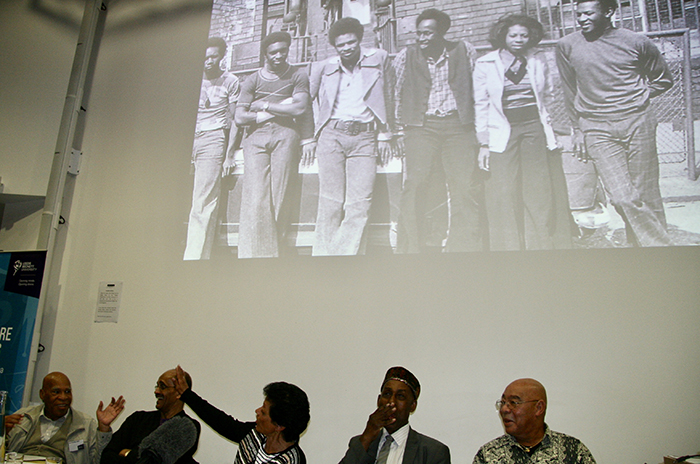 Arthur France, who was born in St Kitts, said that they wanted to have a carnival to celebrate Caribbean culture in Leeds and fight back against racist attitudes and stereotyping in 1960s Britain: “We decided it would be run by West Indians, full stop. We’re always labeled as not being capable of running things. We’ve proved them wrong.” (France, Interview with Max Farrar, 2014). 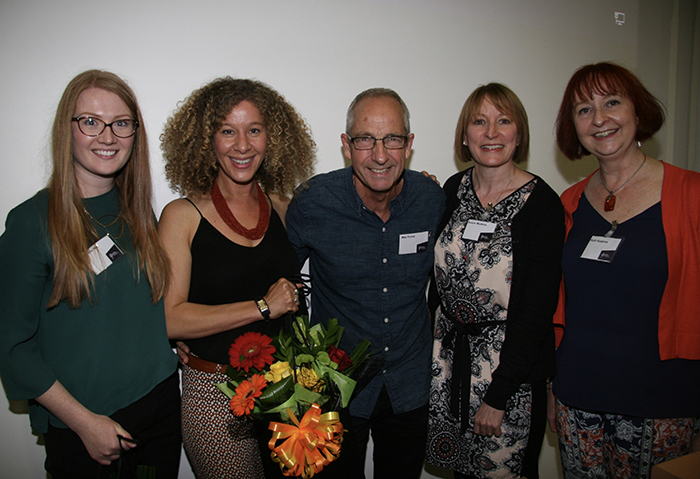 In preparation for the conference, Max and I collaborated with carnival artists, performers, academics, designers and musicians locally, nationally and internationally and formed a number of partnerships between the university and arts, cultural and academic organisations. These included close partnerships with Leeds West Indian Carnival, Leeds City Council, Leeds University-based academic journal Moving Worlds, Cabasa Carnival Arts, The Geraldine Connor Foundation, Leeds-based publishers of Black and Asian Literature Peepal Tree Press, Leeds Young Authors, Chapeltown-based RJC Dance and local Black British and Asian artists, poets and writers. We hope to nurture these partnerships and foste dialogues to see how the university can work more closely with the local community to support carnival arts and research as well as enhance the reach of carnival research at a national and international level.

A common theme in feedback from participants was the view of how inspiring it was to see Leeds Beckett University embracing and celebrating Caribbean culture in Leeds – and taking it seriously. Leeds West Indian Carnival co-founder Calvin Beech, who travelled from Canada to attend, wrote: “It was a very well-organised conference. The presenters covered a wide array of Carnival experiences and were excellent. The Conference certainly made us view ‘Caribbean Carnival’ in a much broader sense and light.”

Other participants commented: “The conference made me feel inspired, proud of Leeds and the contributions of the cultural life of the city by marginalized communities”; while others were very enthusiastic about the way the conference helped them view carnival from a new perspective: “I am now overwhelmed with new knowledge”, “I thought I knew about carnival until this conference. I have learnt so much in the last few days it’s incredible. And now I realise how much more I have to learn and am inspired to continue the journey!” and, from yet another participant: “It was out of this world – should be more like this”. 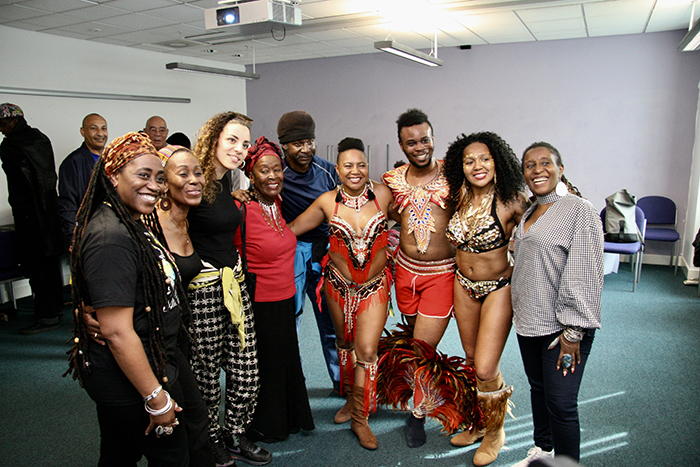 The conference was filmed and photographed and received media attention including an article in North Leeds Life two articles in the Yorkshire Evening Post and a BBC Leeds radio interview with me and Arthur France. The conference was also filmed by four different film crews including ‘Made in Leeds,’ ‘Look North’, a crew filming a BBC documentary on carnival as well as Leeds Beckett film students who are making a documentary about the troupe I play with, Harrison Bundey, who always take a strong political message on the road.

Max and I hope that the conference will have an ongoing social media, academic and impact legacy and future plans include a Carnival Cultures website, 2023 European City of Culture planning team involvement and a publication of selected conference proceedings in a special edition of the scholarly journal the Caribbean Quarterly, the one of longest running academic journals in the English-speaking Caribbean, scheduled for December 2019.

The conference feeds directly into the ‘Caribbean Carnival Cultures’ strand at the Centre for Culture and the Arts which provides a platform for research in the field. The conference website will be turned into a repository for film, photos and presentations from the conference as well providing a platform for continuing carnival research in the UK and across the diaspora The carnival conference and the Carnival Cultures research strand at the CCA has also been chosen as a REF impact case study for the School of Cultural Studies.

The main aim of the conference was to kick-start Caribbean carnival research in the UK and to bridge the perceived gap between the academic study of carnival and carnival arts – to put theory into practice and facilitate a dialogue between them. In this aim, I think we were successful. As one participant writes: “The best element of the conference was the combination of practice and theory. [In] one session I attended, a rhetorical question led to a practical demonstration of dance moves which made the whole question come alive”.