ICRETH Assembly: ‘What is this thing called ‘diversity’ in tourism studies?

Professor of Tourism Donna Chambers from University of Sunderland presented to ICRETH audience a critical enquiry into the meaning of diversity in tourism studies and the consequences for tourism pedagogy and practice. 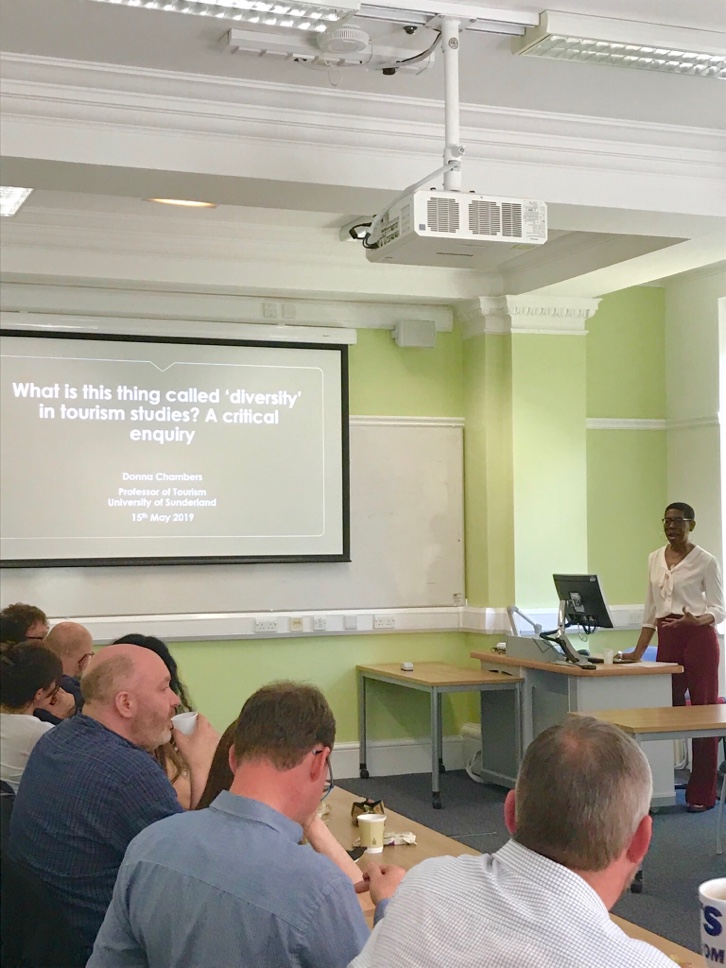 On 15 May 2019, part of the regular research assemblies at the International Centre for Research in Events, Tourism and Hospitality (ICRETH), we hosted Professor of Tourism Donna Chambers. In her inspiring presentation Donna was especially concerned with diversity in terms of tourism knowledge production and problematise the extent to which we as tourism academics and educators are concerned with the origins and nature of the knowledges that are produced, taught and disseminated in our tourism departments and faculties. Professor Chambers discussed these issues against the theoretical backdrop of critical race theory.

In 2014, University College London (UCL), formed a network of students and academics titled ‘Dismantling the Masters House’ (#DTMH) which sought to interrogate Whiteness and Anglocentrism in the academy with a view to facilitating a more critical pedagogy which takes account of, and legitimates, the voices of the traditionally marginalised in knowledge production. The goals of this network have been embraced and adapted by several other higher education institutions in the UK which have begun to openly challenge the Euro/Anglo centric (and inherently patriarchal) nature of the university curriculum, believed to be antithetical to the drive towards more inclusivity.

Within our own tourism academy there have been several publications and discussions which have gathered pace particularly in the last decade, and crucially under the umbrella of critical tourism, which have pointed to the similarly Euro/Anglo centric and patriarchal nature of tourism knowledge and the urgent need for epistemological decolonisation. Undoubtedly, the inclusion of more diverse knowledges can open up the rich varieties of perspectives of and about tourism thus enlivening and truly transforming tourism pedagogy and research. However, arguably, dialogues on the need for epistemological decolonisation have thus far been predominantly confined to the realm of the discursive.

In her presentation, Professor Chambers did not only unpack the discourse of tourism knowledge which she suggested was still predominantly colonial and therefore lacking in terms of the inclusion of knowledges from the Global South, but she also provided practical proposals for how we can engender more inclusivity within our tourism curriculum. In the discussion she has recognised that there is an inextricable link between knowledge production and curriculum design. Professor Chambers believes that as higher education professionals we need to understand the coloniality of tourism knowledge but also seek answers to the question of how we can bring about epistemological decolonisation.

Find out more about the Research Assemblies.

Dorina-Maria is a Professor of Tourism Management, formerly of Leeds Beckett, who conducts interdisciplinary research with a particular focus on the interconnections between tourist spaces, people and emotions in times and places of socio-political conflict.