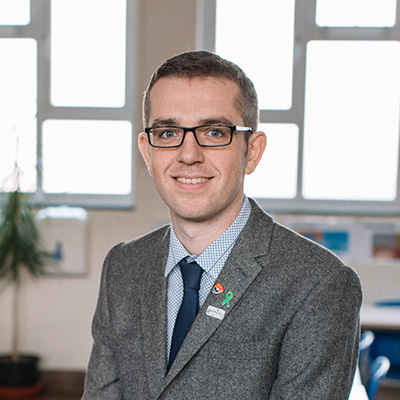 Samuel is a Lecturer and Associate Researcher at Leeds Beckett University and a Head of Year and Associate Leader at a secondary school and sixth form. He also holds a national training role with a large multi-academy Trust.

Samuel has secured a prestigious doctoral scholarship within the Carnegie School of Education which enables him to work in partnership with our Centre for LGBTQ+ Inclusion in Education and to explore and research the role of schools in advancing LGBTQ+ inclusion.

Samuel works with initial teacher training students in school-based and university contexts and he leads on a range of Key Stage 4 and 5 courses within a secondary school and sixth form college. He is also an MA Dissertation supervisor within the Carnegie School of Education here at Leeds Beckett University.

Alongside these roles, Samuel works closely with a range of educational publishers including Hodder, Seneca Learning, ZigZag and CGP. He also holds several examiner, moderator and senior assessor positions with three awarding and examination bodies both in the United Kingdom and overseas.

Samuel's research outputs are linked with the Centre for LGBTQ+ Inclusion in Education and the Carnegie Centre of Excellence for Mental Health in Schools at Leeds Beckett University. His research explores the experiences of teachers who identify as Lesbian, Gay, Bisexual and Transgender, with specific emphasis on the impact of sexual orientation on teacher identity and mental health. Samuel's research explores issues of social justice and inclusion, particularly in relation to mental health, special educational needs, sexual orientation and gender identity.

Samuel draws on the work of Foucault to explore the ways in which discourses create people as subjects and objects of power, with a focus on educational settings. He also draws on Queer Theory and Critical Psychology to question some of the traditional assumptions about sexuality, disability and race. He embraces postmodern and poststructuralist perspectives on inclusion.

Samuel is a member of the University of Cambridge Wellbeing & Inclusion Special Interest Group and sits on the Editorial Board for the International Journal of Learning, Teaching and Educational Research and the Science Journal of Education. He is a Peer Reviewer for the Journal of Public Mental Health, the Health Education Journal and the Journal of the Chartered College of Teaching and is also Guest Editor on Frontier’s LGBT Inclusion in Schools Research Topic, a reviewer for Mind's Mentally Healthy Universities programme and a founding member of the International Network of Transitions Researchers. This network is hosted by TCELT (Transformative Change: Educational and Life Transitions Research Centre) which is an international, interdisciplinary research centre at the University of Dundee.

Samuel has recently co-authored the Supporting LGBTQ+ Inclusion in Education series with Professor Jonathan Glazzard. This exciting series is contemporary and accessible. It synthesises key research on LGBTQ+ inclusion in a range of educational settings and highlights implications for practice. Additionally, Samuel has co-authored a Positive Mental Health series and he continues to work with several publishers including Critical Publishing and Sage.