Partnering with students and primary schools to raise future aspirations

by Esther Cummins and Mandy Pierlejewski

The high levels of engagement from the pupils demonstrated the importance of sharing a love of learning with primary children. 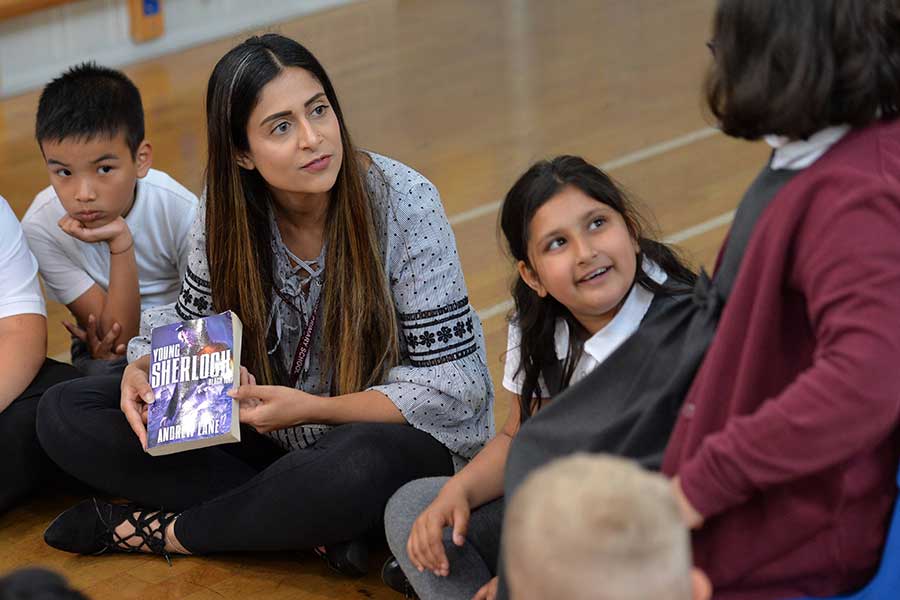 It was a privilege to host 30 Year 6 pupils from Bowling Park Primary School for an Aspiration Day at the university last week, with the added bonus of giving some students on the BA Primary Education (accelerated degree) the opportunity to teach a session before starting on the PGCE programme in September. The pupils engaged in lectures and seminars, exploring different disciplines that can be studied at university life, as well as finding out what it means to be a student at Leeds Beckett.

There has been a national increase in university student numbers over the past twenty or more years, and the accelerated degree has opened up further opportunities for students who are the first member of their family to attend university. Reports still show a demographic difference in relation to gender, ethnicity and class in a variety of subjects, such as the number of females studying STEM. At the Carnegie School of Education, we believe that education should be open to all and not the privileged few and recognise that it is never too early to raise the aspirations of potential students.

To hear exclamations of excitement and joy from 10- and 11-year olds regarding the vast number of books available in the library was an absolute pleasure, as well as the gasps of surprise that some students live on campus. As the pupils deliberated their futures, they express interests in studying beyond the core primary subjects, commonly naming music and sport as well as teaching and medicine as possible career trajectories. The pupils had their preconceived ideas of Higher Education challenged as they discovered Olympic athletes attended the university, although the biggest selling point appeared to be the Chicken Shack on campus!

The high levels of engagement from the pupils demonstrated the importance of sharing a love of learning with primary children. Many asked with eagerness when they could begin their study, as they looked to come to Leeds Beckett instead of starting secondary school in September. As the BA Primary Education (accelerated degree) students shared the many benefits of a university education, including a growth in confidence and meeting new friends, we hoped a seed was sown in these children’s lives. Whether they are future scientists, writers, teachers, athletes or artists, we wish them success in all they do, and hope to see them at Beckett in 8 years time.

Esther is a Lecturer in Education, drawing on her experience as a class teacher and senior leader in primary schools across the country. She believes in the power of education and uses this belief to underpin her teaching and research.

Mandy Pierlejewski is course leader for BA Honours Primary Education 3-7, QTS and a senior lecturer in the School of Education, Leeds Beckett University.