In this blog post Dr Paul Widdop and Dr Dan Parnell, researchers in the Carnegie Faculty at Leeds Beckett University, assess a worrying trend regarding the consumption of Golf, one of the nation’s favourite sports.

Eminent sociologist Pierre Bourdieu once stated that the practice of sports such as tennis, riding, sailing or golf doubtless owes part of its ’interest’, just as much nowadays as at the beginning, to its distinguishing function and, more precisely, to the gains in distinction which it brings (it is no accident that the majority of the most select, i.e. selective, clubs are organized around sporting activities which serve as a focus or pretext for elective gatherings).

In other words as in other leisure fields, sport taste and participation is intertwined with social class. This brings us to the curious case of Golf. Clearly for Bourdieu the taste for the game will be consumed by members of the higher classes, due to the social profit that it brings (such as building new networks, enhancing social capital, both of which can be exchanged at a later date for economic benefit).

Yet, we reside in a world where political tolerance and inclusivity are championed and the notion of inequalities existing is problematic. But there is also another problem with relation to golf which is its barriers to female participants, but is this about to change.

As of 9 Feb, a historical moment in the history of the game unfolded with the inclusion of women members to Royal and Ancient Golf Club of St Andrews. This has been treated, and rightly so, as major breakthrough in opening up the game to females and executing any notion of inequality. But whilst they have broken down one barrier they have essentially reinforced a much greater inequality, one of social class. Take a look at the first female member of the course, The Princess Royal, the fact that a member of the aristocracy is among the first women patrons sends out a clear message as to the orientations of the game. Here we briefly examine the sport of golf and whether it is still marked by class fractions and hidden spatial inequalities.

Golf and those that administer it have worked hard in opening up accessibility to the game to different sections of society. Yet, there are still persistent regulations and codes, such as the firmly enforced attire and etiquette, which are hard to decipher for those lacking in the prerequisite cultural credentials, creating symbolic boundaries of exclusion. Using data from the Department of Culture Media and Sport - Taking Part Survey (2006-2010) there is a worrying trend developing. Indeed, rather than a systematic narrowing of class inequalities, there is in fact a growing disparity. As the graph below illustrates, from 2006 to 2010 salariat classes (i.e., the professional and managerial occupations) have an upward trend in the consumption of Golf, whereas in comparison, the working class consumption rate is decreasing systematically year on year. Clearly more evidence is needed to determine if this trend is continuing. However what is not in any doubt is that there are major class disparities in the game that need to be addressed, to rid it of elitist connotations’. 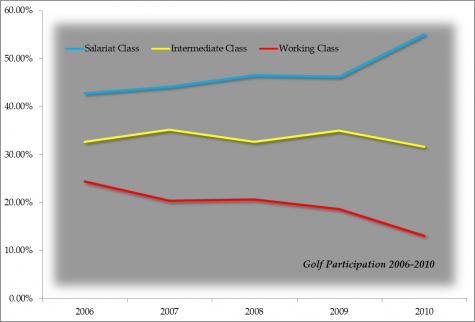 Alongside class, gender, and ethnicity, there are hidden spatial inequlities that imapct upon consumption, which includes golf. Mapping the aggregate data from the Taking Part Survey (2006-2010) against Government Office Regions of England,highlights these spatial inequlities in Golf partcipation. Individuals residing in the affluent South East, and East of England make up 33% of golf participants. There is a fraction of evidence that points at the much debated North South divide. Whilst we must be aware of the limitations of infering from a large spatial scale, the data supports the finding that you are more likely to partcipate in Golf if you reside in the South of England. 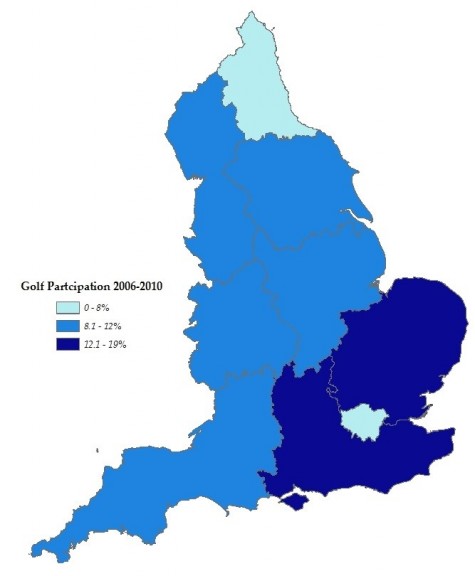 With many municipal golf courses also catering for the working class golfers up and down the country it is important to consider the impact reductions in funding for local authority sport and leisure, will have on class and spatial inequilities in the sport. There are examples across the country of courses closing or threatened with closures, indeed, Western Park Golf Course in Leicestershire is one example and Amington Golf Course has all ready been lost as a result of funding cuts by Tamworth Borough Council, there are many more. Many municipal courses have also been sold to private companies and enterprises, including many in North West region of England across Liverpool, West Cheshire and the Wirral. This will no-doubt contribute to reduced accessibility for working class golfers, and an increasing spatial divide.

What does the future hold?

The announcement of opening up the game to women golfers should see a spike in partcipation for this group, and this should see a diversification in Golf consumers. However, will this just reinforce the growing class and spatial inequalities currently inflicting the game. As we move towards greater levels of unease at what appears to be institutional inequalities, it is difficult to envisage a future whereby Golf can free itself of elitism.

Paul is a former Research Fellow in culture, sport and leisure sociology.