Rio Goldhammer talks about football anthems and their influence. 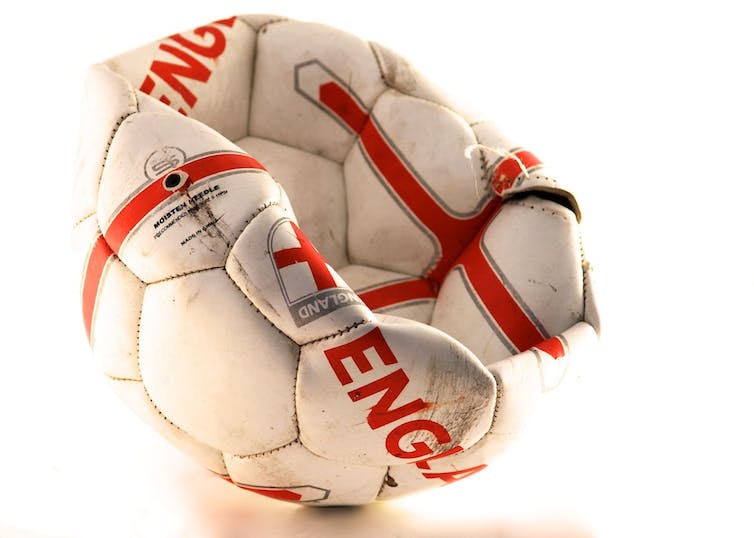 Will England be serenading its football heroes in 2018?

We’re fast approaching the final stages of the 2018 World Cup – and what a tournament it’s been. Germany going out in the group stages turned out to be more than just a chance for schadenfreude – but a harbinger for what has been possibly the most unpredictable World Cup in living memory. One by one, many of the remaining giants fell: Argentina, Spain, Portugal, Brazil. Meanwhile, England won their first-ever penalty shootout and are about to play only their second semi-final since winning the tournament in 1966.

As you’d expect, Baddiel & Skinner’s enduring anthem Three Lions has been sung in pub beer gardens and in city squares since Harry Kane’s brace gave England a winning start to the tournament – their first in an opening World Cup game since Germany 2006.

Lonnie Donegan’s World Cup Willie in 1966 was a cheerful number that accompanied England’s first (and only) major tournament win and was based on the home team’s mascot. More than 50 years on, there doesn’t seem to be any record of how the song performed in the charts. Four years later in Mexico – with expectations high – the squad gave us Back Home, which reached number one in May 1970 (England, meanwhile, went out in the quarter finals to West Germany).

There followed lean years – England failed to qualify in 1974 and 1978. But in 1982, with New Wave, the New Romantics and Two Tone all the rage in the pop charts, England rather mystifyingly selected a song by Chris Norman and Pete Spencer of country band Smokie – possibly because they had written a pop song for England captain Kevin Keegan a couple of years before. The resulting song, This Time (We’ll Get it Right), reached number two in the charts, which was a whole lot better than the squad managed on the pitch, going out in the second group stage.

England’s 1986 campaign is largely remembered for the heartbreak of Maradona’s “Hand of God” which denied the team a semi final berth. The team song, meanwhile – once again performed by the squad – was the instantly forgettable We’ve Got the Whole World at Our Feet by Tony Hiller, best known for the songs he wrote for Brotherhood of Man, winners of the 1978 Eurovision Song Contest. No such luck for this song, which peaked at 66 in the UK charts.

The 1990 World Cup in Italy – which gave West Germany their third title – featured the now classic World in Motion, for which the England squad teamed up with New Order. It was England’s best World Cup performance since 1966 – and the team made a pretty good fist in the recording studio, too. With a contribution from Keith Allen and a rap by John Barnes, the song reached number one in the UK charts. England, meanwhile, went out in the semi finals to West Germany after – you’ve guessed it – a penalty shoot-out.

Three Lions with a side of Vindaloo

It’s an irony that probably the best England football anthem was recorded for the Euros in 1996. The team had failed to qualify for the 1994 World Cup in the US, but the European championships were in the UK, so football was indeed coming home – at least in one sense.

More than just being a brilliant song, Three Lions represents a narrative departure from previous football anthems. Rather than having the players appear on the record singing about playing for England, player cameos were limited to the video while the song itself was sung by The Lightning Seeds with comic duo Baddiel & Skinner and described the emotional rollercoaster that is supporting England’s football team (“30 years of hurt”). A subtle redirection, but one that would subsequently redefine the genre.

For France 1998, the FA commissioned an indie-pop hybrid supergroup starring the Spice Girls and Echo and the Bunnymen for the official anthem – the forgettable (How Does It Feel to Be) On Top of the World. But the chart was dominated by the rerelease of Three Lions and the hugely popular Vindaloo from Fat Les (which reached number two in the UK chart with a little help from Blur bassist Alex James and lyrics by Keith Allen).

Songs for the Golden Generation

In 2002, all hopes were that England’s “Golden Generation” of Michael Owen, David Beckham, Wayne Rooney et al would restore the national team’s pride after the ignominy of going out to Argentina and the Beckham sending off in 1998. To serenade the team in Japan and South Korea, England had comedy duo Ant & Dec, who got to number three in the UK chart with We’re on the Ball. Sadly, on the pitch where it counted, Beckham and co were not as on the ball as Brazil, the eventual winners, who knocked England out at the quarter final stage.

And so to 2006 in Germany, where England went out once again at the quarter final stage, once again after a shoot-out – this time to Portugal. The song was Embrace’s tepid World at Your Feet, but the world was most definitely not at the feet of Stephen Gerrard, Frank Lampard or Jamie Carragher, all of whom missed their penalties.

You have to fast forward to 2014 for the next official England football anthem, written for Sport Relief by Take That’s Gary Barlow and performed by a blended band with a smattering of Spice Girls and other pop singers teamed with former footballers including Gary Lineker, Glenn Hoddle and Sir Geoff Hurst. The song sank without trace, as did England’s football hopes as the team failed to get out of the group stages.

There is no official England anthem for the 2018 World Cup (though there are some good unofficial efforts - The Tallywags in particular). But one thing’s for sure, if Kane and his teammates succeed in ending 52 years of hurt on July 14, you’d be a fool to bet against Three Lions reaching number one as well.

More evidence-based articles about football and the World Cup:

Rio Goldhammer is a PhD student at Leeds Beckett University, researching heritage and identity in Yorkshire post-punk. He is a musician with a background in Cultural Studies and Political Theory, and he currently fronts the Bradford group 1919.