There is also debate and discussion about the productivity differential between differing regions in the UK, including the Leeds and Yorkshire region, in relation to London. Finally, there is data that suggests that productivity is neither evenly nor normally distributed across the economy with a long tail of low productivity firms, particularly smaller SMEs, sometimes being referred to - unkindly perhaps - as ‘zombie firms’.

Economists have disagreed over the causes of these differences, in particular in terms of the change in trend of productivity growth.  There have been numerous suggestions about possible reasons, including a lack of labour bargaining power, changes in the nature of work towards a lower-skilled ‘gig economy’, and lower investment in both public and private spheres, not to forget the small matter of Brexit.

One of the key reasons why the Government and the Bank of England believe productivity matters is because they believe it to be an engine of wage growth, and in turn living standards. However, some economists argue that low wages are actually a cause, not a symptom, of productivity, whilst others consider that there may not be a productivity issue at all, in part due to the way in which productivity is considered and measured.

In macro-economic terms, labour productivity, which is the most common indicator discussed, is determined by dividing output (in terms of GDP) by the number of hours worked in the whole economy. This approach is also commonly used at firm level, where a firm will calculate the labour hours, or sometimes labour cost, per unit of output.

One initial problem with this assessment is the notion of value creep. Due to competitive pressure, firms will innovate and strive to offer more features to their outputs, whether it be products or services, often at no increase in price to the customer or consumer. Over time this produces an increase in value added, and thus in productivity, but which does not show up in the traditional productivity calculation. The second issue with the assessment is in relation to the bottom line, the inputs. Many firms use an array of resources to calculate the value, not just labour. If we consider a firm that has significant energy usage, for example, productivity calculations based solely on labour would not adequately show an increase in productivity achieved through energy usage reduction. This is perhaps a pertinent consideration as we strive to progress to a more sustainable ‘greening’ of the economy. Or consider a firm that has reduced labour input by investing heavily in technology or machinery. This will have increased their input (depreciation) costs significantly and as a result they may not have increased overall productivity, depending on the lifecycle of the investment in relation to the market opportunity. This is why total, or multifactor productivity is often a better way to express and understand productivity, and which will vary from sector to sector, and firm to firm.

Alexander Grous, an economist from the LSE, has a useful assessment of the potential factors at a firm level that impact productivity. These are management practices, workforce flexibility and information communication technology [ICT]. The data he presents suggest that the most significant contribution derives first from management practices and secondly from the combination of all three factors, since it is synergy that increases productivity within a firm. In this, work management practices at a more granular level are seen as consisting of two main aspects; firstly, performance management, and secondly, improvement in operations management, in particular adoption of lean type production and management systems.

The initial difficulty with performance management is specifying what productivity might mean within each business. For example, a firm may have many different processes, of which only one might be the bottleneck or constraint process. The theory of constraints suggests that this is the only resource or process in which productivity matters, as it determines the overall throughput, and hence output, of the business. Secondly there is the divergence between efficiency, which is primarily concerned with performance in relation to a nominal or theoretical target, and productivity, which is about a more holistic view of output, or the value of the output.  As you become more productive your efficiency might rise above 100%, which suggests it is time to review the placement of your goalposts. So, targeted efficiency measures are useful but need to be set in the context of local processes, and in their own timeframe.

In any process “step” within a firm, there is the same issue with measuring multiple inputs: labour, labour cost, machine hours, depreciation costs, energy costs, raw materials, etc. Of course, obtaining this information is often costly and although there is considerable focus today on ‘big data’; this might often be in actuality ‘messy data’ or ‘dumb data’. It may require a lot of cleaning and sense-checking before it can be transformed into useful management information and subsequent analysis. Looking ahead, this is one potential use for innovations in Artificial Intelligence [AI]; advances in artificial neural networks (ANN) are already being developed for this purpose.

Moving on, an important consideration is how productivity relates to profit through the mechanism of gross and net margin. Productivity is often expressed as pertaining to a business unit, a group of individual processes. However, customers buy products, which have to be priced appropriately in order to generate a margin. How the real costs of each process step are accrued towards the unit cost of a product is often not straightforward: firms may not have the data that shows the differential between how productive each process step is depending on what product (or service) is being processed. Often a business can be supporting low margin products with high ones, without realising this is the case. Understanding this impact of the product mix is important when attempting to improve productivity through growth. This issue is often compounded because management accounting often uses variance, which is the financial equivalence of efficiency, to monitor unit costs.

A final issue area for performance management with respect to productivity is the availability and use of information. Managers often concern themselves with lagging rather than leading indicators, because often productivity information is not available in real, or even recently elapsed time. The complexity in appreciating the nature of productivity means that the current vogue regarding key performance indicators (KPIs) can produce a narrow, blinkered vision of what productivity is for a firm. An important way forward here would be to encourage managers to strive for little ‘images of performance’ that could be used to form a richer picture of productivity (this is micro-information, not in any pejorative sense “micro-management”). This is important because productivity is a means to an end,  not the end in itself. Ultimately, productivity is for some purpose and must serve some purpose. At a highly simplistic level the nature of a firm is that it must produce something of value to someone and sustain itself in order for the firm to reproduce itself, though this raises further concerns regarding the nature of the firm (tobacco or tapioca, guns or butter…) Value is a value as well as a metric. Both matter; better metrics lead to better decisions which in turn can enhance productivity. So, productivity can serve both the top and bottom line.

This is where it is important to consider how the management practices referred to earlier, and in particular Lean improvement systems, can impact productivity. Lean is often perceived as about cutting waste, which is the bottom line in our productivity equation. However, it is primarily about adding value, and in particular future value, something that customers are repeatedly prepared to pay [more] for. Lean has an all-encompassing view of waste inputs, which is in synchronicity with the bottom line of the multi-factor productivity perspective. For example, Toyota, the key proponents of lean, never waste the opportunity provided by reducing organisational waste: they always invest the saved time and labour in considering how to add extra value to the top line in our productivity equation.

Consider the example of a firm where they have adopted flexible working and usedICT and thereby reduced the travel time of employees by 2 hours on 3 days a week. The firm could do nothing, in which case productivity has not changed; or it could review the overall labour needed, reduce headcount, and impact its productivity measures that way. However, it could use those hours to look at adding more value to its customers, either to improve its competitive position; perhaps adding more value to its customer’s customers by collaborative innovation; or even to commercialise this to charge a higher price, or to avoid price competition in the future. Therefore, focusing on lean involves a ‘double whammy’ on the equation of productivity, by areduction in wasteful activities within the multi-factored inputs, and using this extra capacity to add value to the top line of the productivity equation. This is one of the key challenges in improving real productivity - that it requires two aspects: a synchronised efficient operation that is ‘lean’ in order to provide the stability for the organisation to focus on the creativity, innovation and flexibility needed in order to add value. We agree with Darcy Bussell, who on Strictly Come Dancing consistently advises contestants that once they have their footwork secure, to focus on their top line! 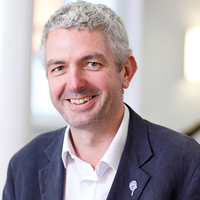 Dr Ollie Jones joined Leeds Business School in 2004 and is a Principal Lecturer in Operations, Enterprise and Supply Chain Management. Ollie graduated in Manufacturing and Business from Cambridge University before working in a large multinational co-operation in a variety of sectors progressing from a graduate to senior management roles. He has been appointed a Teacher Fellow, in recognition of teaching excellence, and continues to works extensively with a different businesses in consultancy, particularly around productivity development, and is currently the research lead for his subject group.