To quote the slogan celebrating the partnership between the Women’s Tennis Association and Virginia Slims during the 1970s, a partnership that celebrated women’s emancipation, ‘You’ve come a long way, baby’ - or have we? Indeed, the progress society appears to have made in recent years in relation to its stance on women’s involvement in football has materialised as a series of constant reminders during the last few weeks.

Yet, I say this with caution and a hint of scepticism. When progress is often measured against a society where women were banned from playing the beautiful game back in 1921, a ban that lasted 50 years, these small progressive steps are perhaps not that enlightened after all. These reminders of progression seem to be everywhere – mainstream coverage of key games on the BBC at peak viewing times; increased newspaper coverage in the sports section; and male footballers tweeting positively about the games and the performances of their female counterparts. Closer to home, I have been pleasantly surprised by my dad texting me the England scores whilst I was out of the country. And, my conversation with a young man from Brazil sitting next to me on my plane journey home are testament to the reach this tournament and women’s football more broadly has had on different people’s lives.

These positive shifts should also be considered in relation to wider developments in women’s involvement in football. There are now an estimated 147 000 women and girls playing the game in England, it has become the biggest women’s team sport in this country, and the emergence of The Football Association’s Women’s Super League ensures that a generation of players are now paid to play. And yet, whilst these developments must be heralded as advancement there is still much to do, as we shall read during the rest of this week’s blogs. Despite the professionalization of the women’s game it is estimated that one top male player earns double the amount earnt by 1 693 women players in combination from the world’s top seven football leagues (Forbes, 2018).

At the other end of the continuum, The Football Association itself recognises a pool of untapped potential comprising of women and girls from ethnic minority communities and women and girls with disabilities. In their blog, Leanne Norman and Marina McGoldrick signpost how keen The Football Association are to also address the under-representation of women in coaching, management and officiating positions.  Yet, this will be no easy feat with the women’s game having a fragmented infrastructure, less investment, and a shorter history than the men’s.

Indeed, a stable, well-resourced and coherent infrastructure within the men’s game has ensured the benefits of playing football are being experienced by a range of different men. For example, the relatively recent phenomenon of Walking Football has attracted large numbers of older and/or less mobile men out of their living rooms and back onto the pitch. For men with a range of learning and physical disabilities there are opportunities to play competitively at different levels of the game. For example, the pan disability leagues at county standard, national impairment-specific leagues for specific impairment groups - Amputees, Blind, Cerebral Palsy, Deaf, Partially Sighted and Powerchair, with these also replicated in international competition alongside a Learning Disability team.

Yet, as Hayley Fitzgerald highlights, these are opportunities less available to older women in the same situation. This blog explores the experiences of women turning to the sport for the first time or continuing to play, and the resultant benefits that accrue from a small inclusive recreational session at Monday Night FC. Similarly, for women with a disability there are less opportunities to play with no national impairment-specific leagues and only one international squad - the England Deaf Women’s team. Yet, The Football Association are keen to address this issue through their pilot dispensation policy whereby adult disability competitions such as the impairment-specific leagues can request mixed gender teams until sufficient numbers are grown for women’s teams and competitions.

Zoe Rutherford and colleagues also focus upon a local footballing initiative addressing a global health issue. Zoe and colleagues report on their findings from a partnership between Notts County FC Football in the Community (FITC) and Macmillan Cancer Support that provides men and women support with their cancer survivorship pathway through rehabilitation exercise opportunities.

Alice Harkness-Armstrong’s blog continues the theme of infrastructure albeit with a different focus. Alice signposts how the limited research base involving women footballers impacts upon the development of performance and the women’s game. Alongside infrastructure, Ruth Brazier’s blog argues that a further challenge lies in addressing belief systems and discourse that continue to position football and femininity as opposite. This ensures women players face a series of conflicts and contradictions that require the constant negotiation of gendered expectations.

In developing upon Ruth focus, Scarlett Drury invites us to shift our attention away from the physical characteristics of women in relation to men, and consider the ways in which women’s progress in the game may have been constrained. She concludes her blog by turning the lens to place men in the context of the realities of the world of elite women’s football posing some alternative and thought provoking questions.

In combination, these blogs offer critical insights through a variety of lenses into the distance that has been travelled in the women’s game, but also signals what also needs to be achieved. 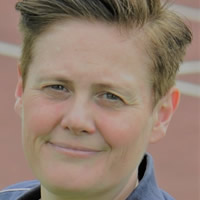